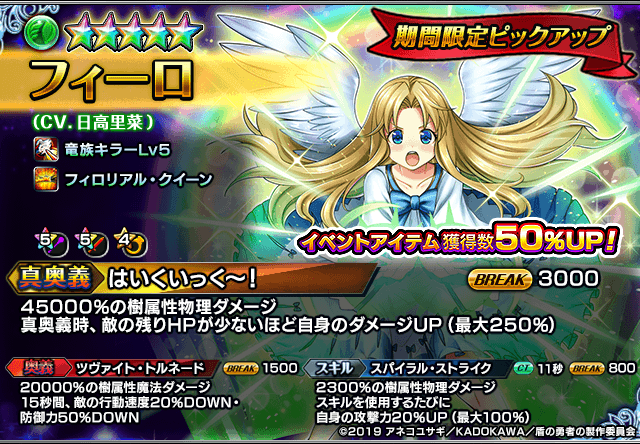 Increases own physical resistance by 20%.

Increases damage against dragons by 50%

However, even though it is a high firepower, it does not have any defensive power nor has critical damage, so the firepower that can be used even when used in a bare state is not so high.

If possible, wear equipment that can increase the critical rate etc. so that damage can penetrate ♪

Since Firo is an attacker, let’s increase the attack power ♪

How to use Filo

Since Firo’s “True Arts” has a higher damage amount as the enemy’s HP is smaller, using it while the HP amount is high will not give a high effect.

I think that it is more likely to fire “True Arts” than to shoot “Arts” twice, so let’s switch around the enemy’s HP about 5/6 ♪

However, when the critical rate UP is given, the firepower will always come out when turning in the “True Arts”.
(Because critical damage can penetrate the enemy’s defense and cause damage)

Should I strengthen my Filo?

“True Arts” only increases the HP power of the enemy.

“Arts” is also a half-hearted firepower for attackers because of the enemy’s defense and action speed down.

It is faster to cut HP from the beginning with a critical attacker, so you can clear it faster, so let’s just wake up without breaking the limit.

If you combine it with a unit that can give you a higher critical rate, you may become a very powerful attacker ♪