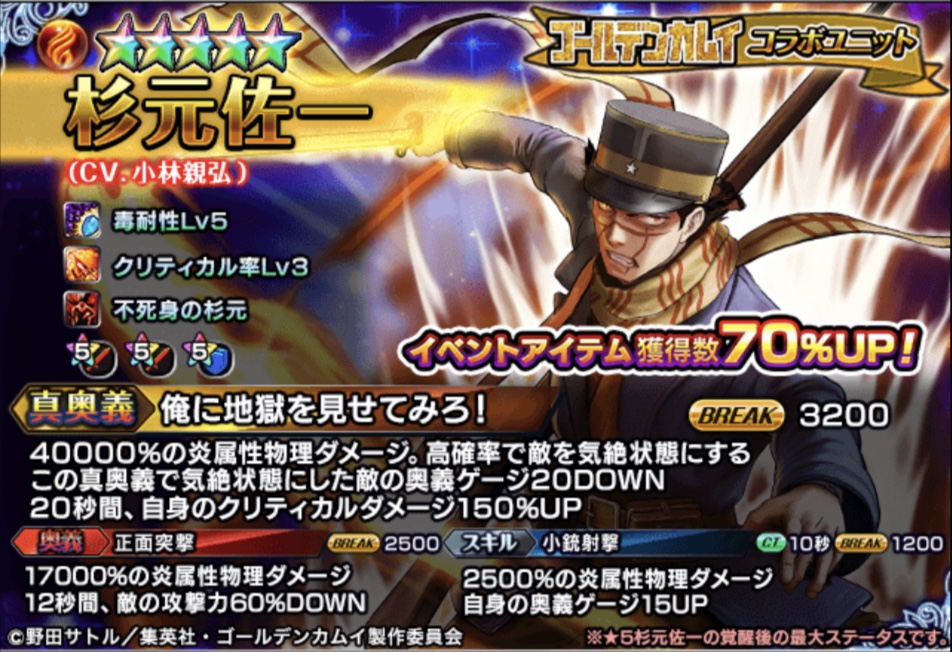 【Show me hell!】
40,000% fire damage physical damage.
There is a high probability that the enemy will be stunned.
Enemy Arts gauge 20 DOWN in this true arts faint.
Increases your critical damage by 150% for 20 seconds.
Break power: 3200

【Front charge】
17000% fire damage physical damage.
The enemy’s attack power is reduced by 60% for 12 seconds.
*No overlap with effects of other units
Break power: 2500

Although it is a true equipment of Luan, True “Gekigan” can raise the critical rate by 70%, so it can be increased by 100% along with the ability’s “critical rate”.

Physical damage can be increased with equipment abilities, so it’s a perfect match!

If you replace Luan when you get it, you should equip Saichi Sugimoto with it.

*1 Any equipment that can manage the mystery gauge
*2 Items that can be changed or most reduced according to the attributes of the enemy
Saichi Sugimoto is able to reduce enemy’s attack power by 60% by “mystery”, and it is possible to greatly increase the survival rate of allies.

If you equip the mystery gauge as quickly as possible and repeat the “mystery”, you will be able to clear more quests that require shields.

* Equipment that can increase damage to all allies and themselves
Saichi Sugimoto has a high firepower of 40,000% and critical damage 2.5 times, so you can get very high firepower.

It’s a bit disappointing to have 5 star defense equipment, but since it can be used with one-pan, let’s equip it so that the fire power is increased♪

Saichi Sugimoto is an attacker, so let’s increase her attack power♪

How to use Saichi Sugimoto

Saichi Sugimoto’s “Arts” has a very high DOWN rate of 60% DOWN the enemy’s attack power, so it is possible to greatly increase the survival rate of allies.

If you combine it with a defender or healer, you can solidify a very strong protection ♪

It is especially effective against enemies that cause immediate death damage, such as the 21st floor of the trial corridor.

Regarding “True Arts”, it is possible to block the movement of the enemy by stunning it in addition to high firepower, and reduce the Arts gauge of the enemy who stunned, so delay the action of the enemy Is also possible.

Should I strengthen my Saichi Sugimoto?

There are few awakening materials, and it is very easy to awaken, so there is no loss in awakening for the time being.

However, don’t make it 5 convex right away, just wake it up and set it to LVMAX.

If you have Gerard, Setis, or Rem and can’t clear the 21st floor of the trial corridor, you may grow up to the MAX limit♪