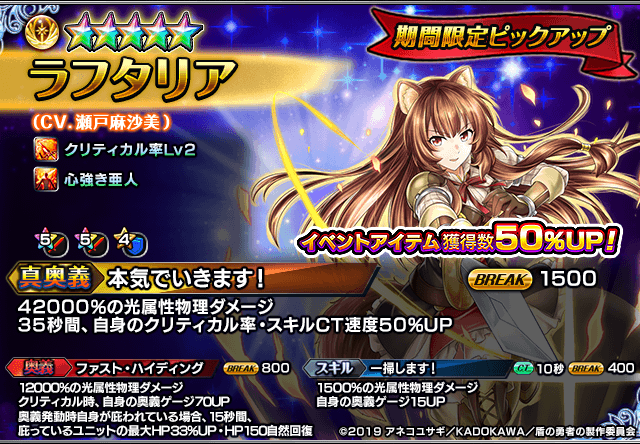 Accuracy 20% UP ・ If you are under cover, increase your damage 30% (no duplication)

【Fast hiding】
12000% light physical damage.
When critical, increase your own gauge 70 UP.
If you are under escort while activating Arts, the bottom unit’s maximum HP increases by 33% and HP recovers naturally for 15 seconds.
Break: 800

If you can afford the rainbow ball, please try replacing the true equipment!

If you can’t afford a rainbow ball, we recommend Gram, which is available through the permanent quest.

Equip defense equipment according to the enemy’s attack type and attributes.

Should true equipment be replaced? 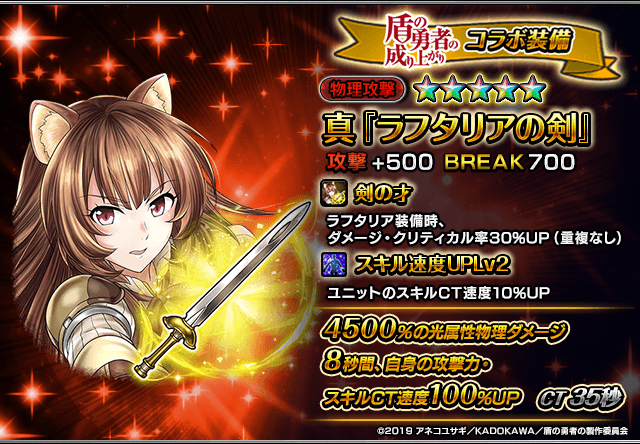 Raphtalia Replace the rainbow ball if you can afford it ♪

If you combine this with “True Arts” & Ability “Critical chance” that increases the Critical Rate, Critical Rate will always be 100% UP ♪

In addition, because the damage can be improved, the firepower is further improved!

Not only that, Actuality & Skill CT speed can be increased by 100% in 35 seconds of CT, so it can be very effective even if equipped with another attacker.

Required equipment has been replaced to some extent, but if you can afford the rainbow ball, let’s replace it ♪

Raphtalia is an attacker, so let’s add attack strength ♪

How to use Raphtalia

Since “Arts” is effective only for the defender of the eavesdropping system, Naofumi Iwatani or Celia, Gerald Can not be demonstrated.

Since the Arts gauge UP is also limited when a critical event occurs, If there is no defender to cover the party, you can raise the damage rate of Raphtalia by increasing the critical rate and increasing the skill CT speed. Let’s turn it on ♪

Should I strengthen my Raphtalia?

It has a very high attack power and can do great damage to enemies.

You can also use it as a defender exclusive healer that protects you with “Arts”, but if you use it as an honest healer, you can use the permanent unit Aristella is better.

If you grow Raphtalia, let’s grow it if you want to use it as an attacker ♪