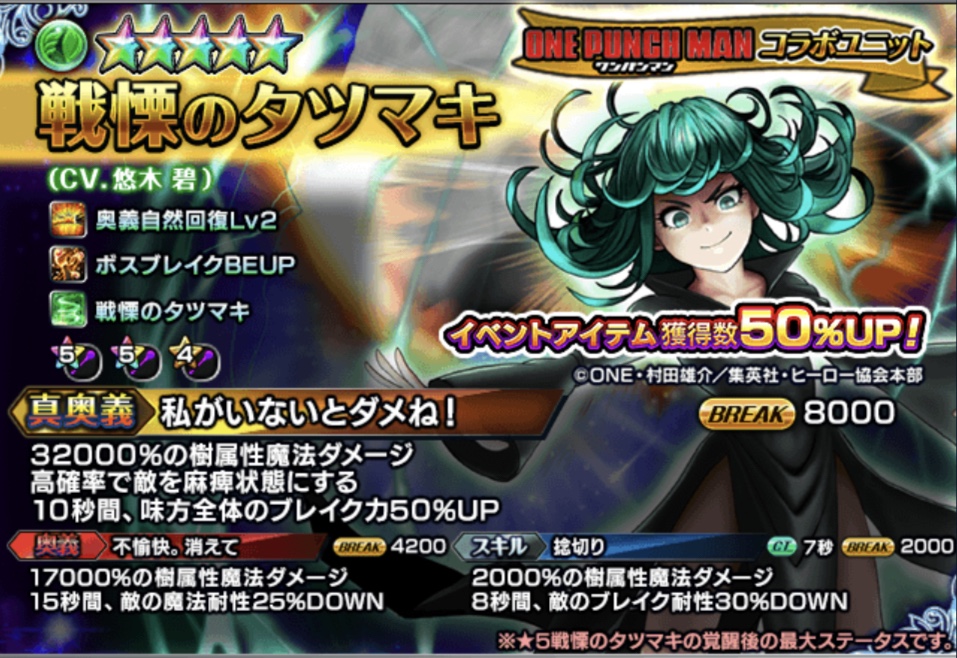 Arts gauge recovers by 2 each

When the boss breaks, the BE appearance amount increases by 100%

[It’s useless without me! ]
32000% magical tree damage.
Breaking power of all allies increased by 50% for 10 seconds.
There is a high probability that the enemy will be paralyzed.
Break power: 5500

Don't forget to help Ruu who can increase the critical rate by 100% when the enemy is paralyzed in the Star 4 equipment frame!

Tatsumaki can also be used as a sub attacker, so let’s increase the attack power ♪

How to use Terrible Tornado

Tatsumaki’s “Arts” can grant magic resistance DOWN, so if you take it to the magic attack party, you can increase the overall firepower.

There is no point in focusing on physical attacks, so let’s attack with “True Arts” so that you can break as soon as possible ♪

When making a party focused on magic attacks

Should I strengthen my Terrible Tornado?

Tatsumaki can be raised if the following conditions are met ♪

It can be very useful in such situations, so you may want to raise it.

However, do not make the limit breakthrough to MAX, but first try to see the situation with 3 convex.

By the way, if it’s a breaker, platinum is honestly better (laughs)